Chinese Government Gets Sick Of Islamic Violence,
Take 13 Muslim Jihadists And Execute All Of Them 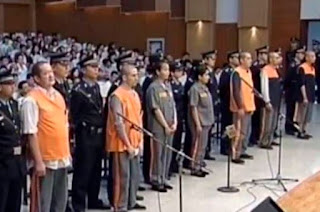 China executed 13 people today for “terrorist attacks” in the far western region of Xinjiang, state media said, while a further three were sentenced to death for staging a lethal attack in Tiananmen Square in Beijing.
“The 13 criminals had planned violent terrorist attacks and ruthlessly killed police officers, government officials and civilians, which took innocent lives, caused huge property losses and seriously endangered public security,” the official news agency Xinhua said.
Xinjiang is the traditional home of Muslim Uighurs who speak a Turkic language, and China has blamed previous attacks on Islamist separatists it says seek to establish an independent state there called East Turkestan.
Exiled Uighur groups and human rights activists say the government’s own repressive policies in Xinjiang have provoked unrest, something Beijing denies.
The 13 executed men were involved in attacks in different parts of Xinjiang, including one last June that killed 24 policemen and local residents, Xinhua said.
In the Tiananmen case, five people were killed and 40 hurt when a car ploughed into a crowd in the square and burst into flames. Those killed included three people in the car.