US Navy Deploying HAARP Tesla Weapon Platform SBX-1 to North Korea
There are numerous HAARP facilities in other countries around the globe that the Tesla Weapon Platform SBX-1 possibly could interact with. But then, we have to wonder what Assistant Secretary Walker was referring to when he stated that they got out of HAARP Alaska what they wanted and were moving on…moving on to what?
In the report “Air Force Admits Weather Control via HAARP and New Tech,” David Walker, Deputy Assistant Secretary of the Air Force for Science, Technology and Engineering, very-matter-of-factly states that they took over from the Navy and will be moving on; "to managing the ionosphere, what the HAARP was really designed to do, to inject energy into the ionosphere to be able to actually control it…" 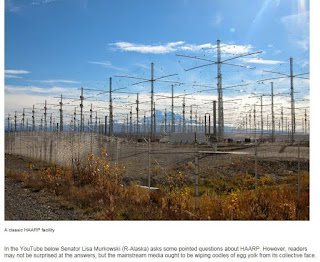 Built at a cost of more than $290 million, the site has 180 antennas on 30 acres that are used to direct energy into the ionosphere, which is 55 miles to 370 miles above the Earth, and monitor changes in the flow of charged particles. Stevens was the godfather of HAARP, which he helped start two decades ago with annual earmarks slipped into the defense budget.
The U.S. Air Force intends to dismantle the High Frequency Active Auroral Research Program (HAARP) in Gakona, Alaska, by or during the summer of 2014!
It seems that no research facility can be found to take over the HAARP Alaska facility. Could that be an indication that the weather modification system is regarded unfavorably? I find that as a possibility and extremely interesting, especially in view of all the technology that was invested and built into it. If no one wants to continue operating HAARP, will the State of Alaska be interested in it for education research purposes? But then, maybe HAARP-at-sea-ships, i.e., the Tesla Weapon Platform SBX-1, probably will be the most effective ‘on-site’ HAARP facility rather than one remotely stationary on land.
For those still inclined to deny geoengineering, here are TV weather persons talking about, showing and admitting to weather geoengineering.