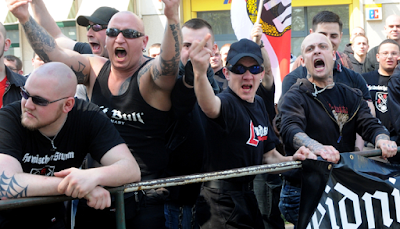 Patriotic Germans are taking matters into their own hands as the traitors in their government are assisting in the invasion of their own country.
http://whiteresister.com/index.php/news/1829-patriotic-germans-burn-down-shelter-meant-for-third-world-invaders
From The Telegraph:

German police say they are looking for suspected arsonists after a gymnasium intended as a shelter for refugees burnt down overnight. Authorities in Nauen, nine miles north-west of Berlin, said they believe the attack was deliberately targeted at asylum-seekers.
The sports hall was due to house 130 refugees from September but was empty at the time of the suspected attack "If investigations find that this was a xenophobic act, Brandenburg's police and justice will do everything to bring the perpetrators to justice," said the state's president Dietmar Woidke.
"There will be zero tolerance for any form of xenophobia… such action is shameful and unworthy of Germany’, he continued.
The alleged attack is the latest in a wave of anti-immigrant incidents in Germany, as the country prepares to host a record 800,000 asylum seekers. The eastern town of Heidenau saw violent protests at the weekend over the opening of a new refugee centre. German Chancellor, Angela Merkel on Monday slammed the protests as "vile", condemning families with children who joined the demonstrations as well as neo-Nazis.
Meanwhile, a record number of refugees arrived in Hungary from Serbia on Monday.
Hungarian police reported 2,093 migrants - the highest ever daily total - crossing the border near the eastern town of Roszke in the days before the EU-member state completes a border fence to keep out migrants. Those refugees were part of a wave of around 7,000 migrants who were blocked from entering Macedonia last week, when the country declared a state of emergency and closed its borders.
Janos Lazar, the chief of staff to the Hungarian Prime Minister, criticised the European Commission’s response to the migration crisis in an interview with Hungarian newspaper, Magyar Hirlap. "The European Union distributes border protection funds in a humiliating way. Old member states have nicked the money from new members," Lazar said.
Lazar's remarks came a day after Commission President Jean-Claude Juncker criticised EU governments for "finger pointing" instead of confronting the crisis with viable measures.