J. Trudeau, E. May going to
Paris Climate Conference
Apparently Justin Trudeau is taking Elizabeth May with him to the Conference of the Parties (COP 21) Climate Conference in Paris in December. They will fit in well with thousands of fellow environmental socialists talking about climate, a topic they don’t understand.

At the 1992 Rio Conference, Maurice Strong introduced Agenda 21, the blueprint to create a one-world government.

The central theme at that conference was “Environment and sustainable development.” The claim was that global warming caused by the CO2 produced by developing nations was destroying the planet. In Paris, they will further a Kyoto-type agreement, called the Green Climate Fund. Developed nations must pay for the sin of producing from fossil fuels CO2. This fund will compensate developing nations who suffered the supposed consequences.

This is classic redistribution of wealth, the very basis of socialism.

The United Nations Framework Convention on Climate Change (UNFCCC) created the COPs and the IPCC (Figure 1); the COP handles the political process, and the IPCC produces the science they need. 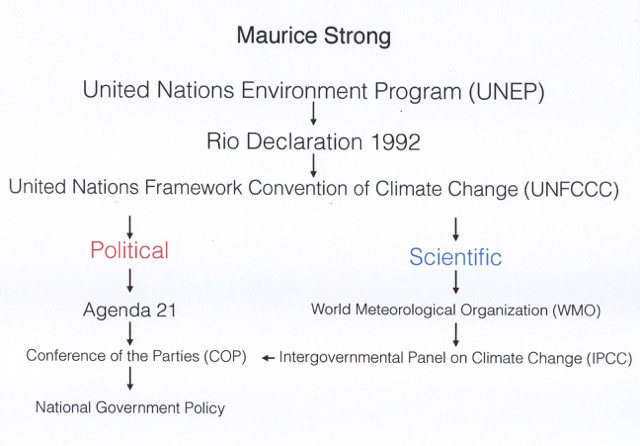 COP 15, held in Copenhagen in 2009, was a critical meeting about implementing the Kyoto Protocol through a global carbon tax. Before the meeting, one thousand emails were leaked from the Climatic Research Unit (CRU), home to major players in the IPCC Reports. The emails showed malfeasance and manipulation to create science designed to blame alleged "global warming" on CO2.
However, these email disclosures -- known as "Climategate" -- were only a slight setback. Power brokers knew most people didn’t understand what was going on, so they mounted phony investigations. Some, like Clive Crook, Senior Editor of The Atlantic knew this and wrote:


“I had hoped, not very confidently, that the various Climategate inquiries would be severe. This would have been a first step towards restoring confidence in the scientific consensus. But no, the reports make things worse. At best they are mealy-mouthed apologies; at worst they are patently incompetent and even wilfully wrong. The climate-science establishment, of which these inquiries have chosen to make themselves a part, seems entirely incapable of understanding, let alone repairing, the harm it has done to its own cause.”

The political agenda was slowed, but not halted, although more people and countries began to ask questions about it.

So at COP16, they introduced the Green Climate Fund with the World Bank as the interim trustee. In September 2015, the European Union and South Korea committed to making the GCF a major part of the Paris COP. SONGDO, 17 September 2015 – Meeting on the occasion of their Eighth Bilateral Summit, the heads of the Republic of Korea and the European Union stressed the need to tackle climate change and confirmed their resolve to play their part in concluding a successful universal climate agreement in Paris later this year.

The three leaders affirmed their ambition to “make the Green Climate Fund fully operational and the main operating entity of the financial mechanism” under the UNFCCC for the Post-2020 climate regime.

Canada has already contributed to the Fund in 2014:


The Government of Canada has joined other nations in pledging to the Green Climate Fund, committing CAD $300 million to the Fund shortly following its first Pledging Conference in Berlin, Germany.

Trudeau, with Elizabeth May’s urging, will undoubtedly make a greater contribution and commitment in Paris. Despite this, many others are not paying:


Friends of the Earth International today demanded that developed nations provide the Green Climate Fund with the resources they pledged to it in 2014, warning that the contributions made so far are alarmingly low.

Thousands will go to Paris in December, with over half of them Non-Government Organization (NGO) members, including Sierra Club members. Elizabeth May will feel at home as past President of the Canadian Sierra Club.

The tragedy is that the entire exercise is completely unnecessary. As the French mathematical society, SocietedeCalculMathematiqueSA wrote in a recent paper titled, “The battle against global warming: an absurd, costly and pointless crusade.”


There is not a single fact, figure or observation that leads us to conclude that the world's climate is in any way disturbed. It is variable, as it has always been, but rather less so now than during certain periods or geological eras. Modern methods are far from being able to accurately measure the planet's global temperature even today, so measurements made 50 or 100 years ago are even less reliable.
Concentrations of CO2 vary, as they always have done; the figures that are being released are biased and dishonest. Rising sea levels are a normal phenomenon linked to upthrust buoyancy; they are nothing to do with so-called global warming. As for extreme weather events – they are no more frequent now than they have been in the past.

The "battle against global warming" is built on the false science created by the IPCC to support the political objective of Agenda 21. German Physicist and meteorologist Klaus-Eckart Plus explained why too many scientists don’t understand this: They've quite simple never read what the IPCC actually said:


“Ten years ago I simply parroted what the IPCC told us. One day I started checking the facts and data—first I started with a sense of doubt but then I became outraged when I discovered that much of what the IPCC and the media were telling us was sheer nonsense and was not even supported by any scientific facts and measurements. To this day I still feel shame that as a scientist I made presentations of their science without first checking it. Scientifically it is sheer absurdity to think we can get a nice climate by turning a CO2 adjustment knob.”

Agenda 21 is founded on the false idea that the world is overpopulated, and resource use is unsustainable. Elizabeth May recently underlined the importance of population control:


Green Party leader Elizabeth May admits she signed a population control resolution calling for financial sanctions against families who have more than two children, and for Canada to support abortion access worldwide.

The IPCC created the "science" bolstering the politics of Agenda 21. They claimed to prove that CO2, the byproduct of industrialization, was causing global warming. This was the "villain" they needed: a supposed global threat caused by wealthy nations who got that way by "exploiting" developing nations. The IPCC claims this "fact" requires a world government to set everything straight through a reduction in population, a reduction in development and a redistribution of wealth.

And Justin Trudeau and Elizabeth May are off to Paris at taxpayers' expense, supported by the 39 percent of Canadians who voted Liberal.