US Navy deploys aircraft carrier to the Middle East 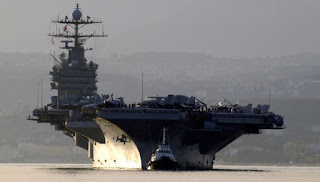 The Navy announced on November 16 the deployment of the USS Harry S. Truman
aircraft carrier and its strike group to the Middle East.
The Truman will join the French aircraft carrier Charles de Gaulle in the Persian Gulf area and will assist in the war against the Islamic State in Iraq and Syria (ISIS). The deployment comes days after ISIS conducted terrorist attacks across Paris, but was planned long in advance. The presence of two carriers in the region will allow the U.S.-led military coalition to step up its airstrikes against the terrorist group in the coming months.
The Truman's predecessor, the USS Theodore Roosevelt, left the Persian Gulf early last month. The French announced the deployment of the Charles de Gaulle last week. It will begin its deployment on Wednesday. The Roosevelt was responsible for 1,812 combat sorties totaling 10,618 combat flight hours and expending 1,085 precision-guided munitions against ISIS, the Navy said according to the U.S. Naval Institute. The Truman departed from its home station in Norfolk, Va., and will arrive in the Middle East within the next couple of months.
The Truman's strike group consists of the Carrier Air Wing Squadron 7, Destroyer Squadron 28, and ships USS Anzio, USS Bulkeley, USS Gravely and the USS Gonzalez (DDG 66).