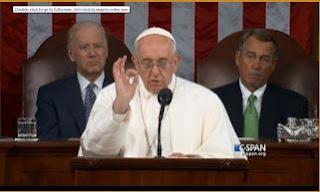 “Today, Jesus weeps as well because we have chosen the way of war, the way of hatred, the way of enmities. We are close to Christmas. There will be lights, there will be parties, bright trees, even Nativity scenes — all decked out — while the world continues to wage war,” he said during Mass at the chapel of the Santa Marta residence in the Vatican.


The pontiff said of the Christmas cheer, “It’s all a charade,”

“What shall remain? Ruins, thousands of children without education, so many innocent victims and lots of money in the pockets of arms dealers. Jesus once said: ‘You can not serve two masters: Either God or riches.’ War is the right choice for him, who would serve wealth: ‘Let us build weapons, so that the economy will right itself somewhat, and let us go forward in pursuit of our interests.
There is an ugly word the Lord spoke: ‘Cursed!’ Because He said: ‘Blessed are the peacemakers!’ The men who work war, who make war, are cursed, they are criminals,” Francis said.

“A war can be justified — so to speak — with many, many reasons, but when all the world as it is today, at war — piecemeal though that war may be — a little here, a little there, and everywhere — there is no justification — and God weeps. Jesus weeps.”

By Maria Stainer - The Washington Times