WARSHIPS OFF COAST OF ALASKA, You Won’t Believe Who Sent Them 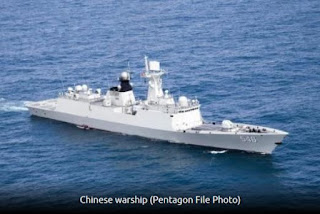 While the people of Alaska have been arranging a few surprises for President Obama, it appears that the Chinese military thought they would also send him a little something to make his trip to the 49th state a little special. A new report just released from the Pentagon says that the U.S. Military has spotted five Chinese navy ships off the coast of Alaska in the Bering Sea, heading in the direction of the Aleutian Islands.
While there is nothing illegal about this transiting of the vessels, it is very unusual In fact the presence of the Chinese ships, including three combat ships, a replenishment vessel, and an amphibious ship, marks the first time that the U.S. military has reported seeing “any such activity in the area,” The Wall Street Journal reports.