Migrants met by human wall in Finland - Turned around 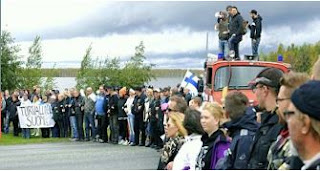 More than hundred people gathered on Saturday in Torneå to protest against immigration. Reports that there were many Finnish flags and people of all ages in place.

Just before 13 o'clock the participants formed a human wall on the Finnish side of the border between Sweden and Finland. - We are opposed to so many asylum seekers coming to Finland. They have come through lots of safe European countries before they reached Finland, and they should have stayed there, said a middle-aged couple during the demonstration.

- We have just seen men, no families. They are welfare refugees and therefore we protest, said the man.

The woman suggested that Finland instead should take in refugees from refugee camps in the world.
About twenty refugees turned around because of the threatening atmosphere. Interior Minister Petteri Orpo says that the stricter stance means that all foreigners who illegally enter the country can not continue their journey before their cases have been dealt with. It is not about that the border control has been reintroduced.

Orpo also says that it is the police who have the main responsibility in the matter.

Police will from now on immediately make contact with anyone seeking asylum, at the border. Asylum seekers will be quartered and their asylum application will then be processed rapidly. If the applicant does not have the conditions for asylum, deportation follows.

- It is first and foremost that we must bring the situation under control. This is the way. The Minister also said that Finland can not have a situation where hundreds of asylum seekers move around freely.